The Story of Katahdin Hair Sheep 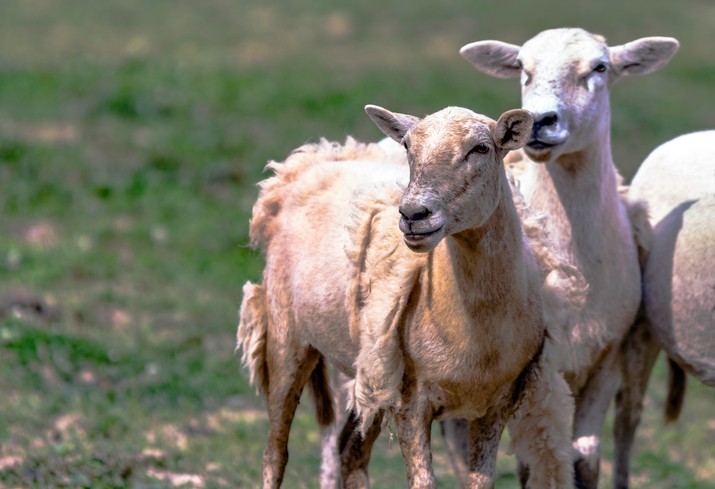 Hey, everyone! We’ve been giving you some history behind the breeds of animals that we raise here at the ranch. As you know, we recently added a flock of sheep to our menagerie; but these aren’t any ol’ sheep, folks. These are Katahdin hair sheep!

In the 1950’s, a man by the name of Michael Piel from the state of Maine set out to develop a breed of top-quality meat sheep. They would reproduce prolifically, and yet require a very minimal amount of maintenance and parasite treatments; sheep that would thrive from grazing and foraging.

He was aware of several varieties of “hair sheep” that had their roots in Africa. These sheep didn’t grow wool that needed to be sheared; rather, they grew coats of thick wooly hair during the winter that naturally fell off in the spring. Piel recognized the value of this feature, and he decided to invest in a few lambs. He contacted a breeder living in the U.S. Virgin Islands who had been doing agricultural research with hair sheep, and it wasn’t long before 3 yearling lambs were being shipped all the way from St. Croix!

After the lambs matured (2 ewes and a ram), he bred the ram with several British meat-type ewes, as well as with his 2 hair ewes, striving for and selecting the best attributes a sheep can have; herd instinct, high fertility, motherly ability, pest resistance, and lean meat.

Piel worked diligently for nearly 20 years to achieve his ideal hair sheep. By the early 1970’s, he established a flock of 120 ewes that he named “Katahdin Sheep”, after Mt. Katahdin (the highest peak in Maine). He continued to refine the breed over the next few years until a heart attack abruptly ended his life in December of 1976.

Where Are They Now?

Although Michael Piel never saw his sheep become famous, his vision was continued by others who took interest in his work. In 1985 Piel Farm founded Katahdin Hair Sheep International. As the years have gone by, Katahdins have grown to be very popular across the nation, and even worldwide! They are known for their utility and productivity; a hardy, docile sheep that is resistant to pests and heat.

That’s why we chose them for Rafter W Ranch; they’re just one of the best varieties of sheep out there, and we think you’ll agree when you try some of the fresh lamb meat from our store!